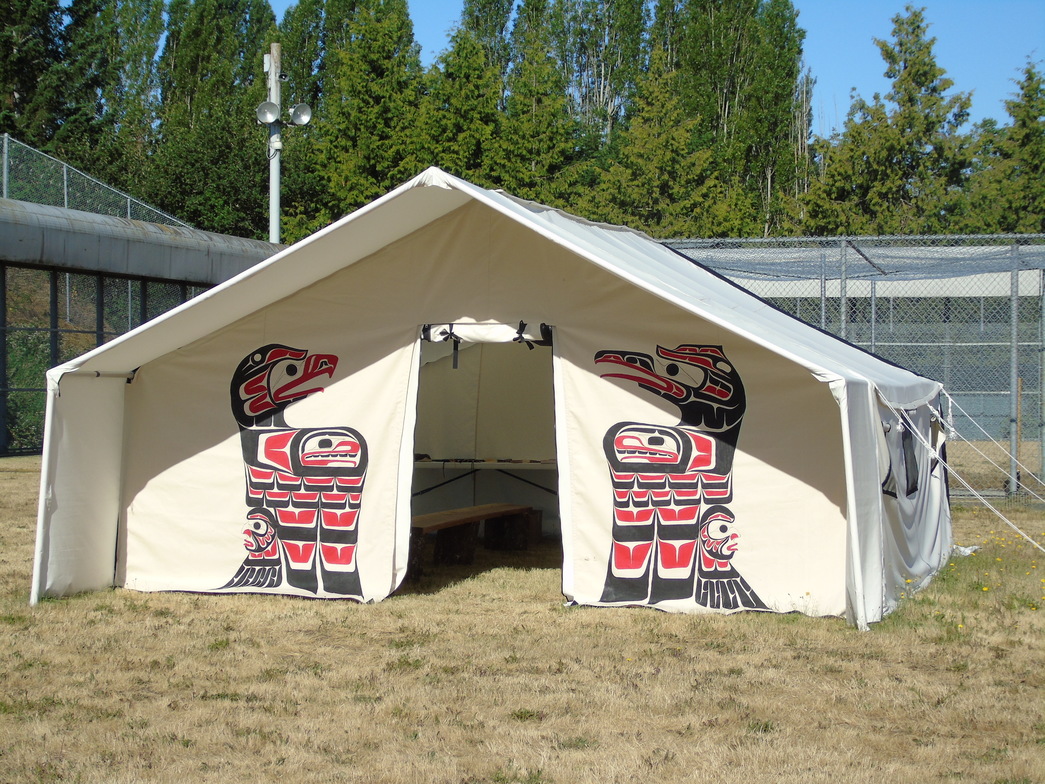 This article first appeared in the January 2019 issue of the Diocesan Post.

In our work at the Vancouver Island Regional Correctional Centre (VIRCC) in Victoria, Chief Gordon Edwards of the Snaw Naw As (Nanoose Bay) First Nation, the Aboriginal liaison worker, and I as chaplain, were trying to imagine a way to create a sacred space within the jail where inmates could encounter nature, find comfort and peace, and pursue spiritual learning and healing. The solution: “If we can’t bring the guys to a longhouse, we’ll have to bring a longhouse to the guys!”

Once the men learn more about their identity, spirituality and the sacred practices of their culture, they will hopefully continue to seek out these resources back within their own communities once released. The spirituality of many Aboriginal inmates is a mix of traditional Indigenous culture and Christian beliefs and practices.

The diocesan Vision Fund recently awarded $6000 to the Spiritual Services team at VIRCC to buy a 16 ft. by 20 ft. canvas wall tent, which inmates have transformed into a portable Indigenous meeting house for use by the native elders, chaplains, inmates and staff. Indigenous inmates painted the front of the rectangular tent in the style of a Coast Salish Longhouse. The raven and the eagle stand on either side of the meeting house door. They welcome all who enter the tent in search of healing and peace. Looking outward at the feet of the raven and the eagle, are two watchers. The four feathers below each watcher represent the four directions, which guide us on our journeys.

Inside the meeting house is an earthen floor, furnished with cedar benches, blankets, a wood-burning stove, and other items found in a traditional Longhouse. Together, these natural elements transport the inmates away from the cold, hard surroundings of concrete and bars, and help the men to open themselves to the spiritual medicines that lead to a better path.

Although the meeting house is not considered a longhouse, it is a place where the ceremonies and healing functions associated with a traditional longhouse may be available to inmates serving at VIRCC. Research by BC Corrections shows that Indigenous inmates are often first introduced to their own culture while in jail, and not within their own community. Indigenous persons constitute about four per cent of the BC population, but about 25 per cent of correctional centre nmates across the province. Many of these men have very complicated, volatile relationships with their home communities. Some nmates are prohibited by court order from returning to their communities for a time.

The current overrepresentation of Indigenous persons in the correctional system cannot be separated from the Indian Residential Schools experience, where ancient patterns of culture, belief, language, family systems and governance were suppressed by the policies of assimilation. This overrepresentation also results in a greater number of Indigenous children being placed with Family Services and Foster Care.

Thanks to the Vision Fund, this Indigenous meeting house is a simple, yet powerful way to support the restoration of Indigenous identity and culture to this marginalized population, and will provide years of healing, reconciliation and hope for thousands of Indigenous men within the Diocese of BC.

The Vancouver Island Regional Correctional Centre, located on Wilkinson Road in Victoria, is a maximum security jail that has been in continuous operation for over 100 years. First established as a prison farm in 1913, it later served as a psychiatric institution (1919-1964) before assuming its current role as a maximum security provincial correctional centre.

The Rev. Canon Kevin Arndt has been at VIRCC for almost nine years, working directly with many Aboriginal inmates in chapels, Bible study, meditation classes, healing circles, pastoral support and personal counselling. He is also an associate priest at St John the Divine in Victoria.