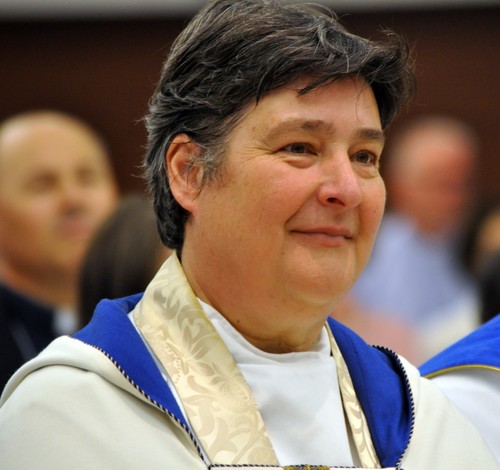 Elizabeth is a “prairie flower” from Winnipeg, who was quickly wisked away to Saint John, New Brunswick where she grew up watching the highest tides roll in and out, along with the fog banks. Her dream was to become a “naturalist” in the park system, but her journey took her to forestry tree farms, and running programs like “Smokey the Bear” in Nova Scotia.

However there was always a pull to the life of the church, and from an early age Elizabeth helped her mom lead vacation bible schools. Later on she taught confirmation classes and bible studies at the cathedral in Fredericton.

Following an early career as director of the Nova Scotia Forestry Association, Elizabeth began her theology studies in Montreal and from there, returned to her home diocese of Fredericton. She has served in parishes in Fredericton, Rothesay, Saint John, and later in the diocese of New Westminster in Vancouver and Ladner, and most recently moved to Qualicum Beach where she and her spouse Susan live, not five minutes away from their two grandchildren. Former ministries have included work as a regional archdeacon of Westminster, chaplain at RCS/Netherwood.

At present, Elizabeth serves as the incumbent of the Anglican parish of St Mark, regional archdeacon for Nimpkish, and a member of the diocesan liturgy team. She is a fan of Messy Church, great music, storytelling and puttering in the back garden... fighting with the moss every day!