Everything you need to know for an upcoming synod 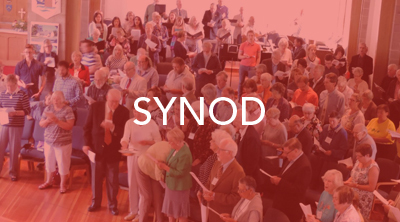 Synods (or regional conventions) are usually held every two years. Delegates are elected from parishes across the diocese to attend. These are arguably the most important meetings held in a diocese because it is here that decisions about the future direction (strategy, finance, vision) are made. When a synod is not in session, Diocesan Council acts as the synod between synods, making these important decisions on behalf of the parishes.

In 2014, our diocese, through a motion of Synod, adopted a diocesan vision, developed through consultation, prayer and discernment, which we have been faithfully using to guide our actions at the local and diocesan level ever since. God has been with us every step of the way, and signs of new and renewed life have been witnessed in every corner of our diocese. We are truly blessed.

This 2015 document summarizes the actions of Synod as they relate to the dicoesan vision and outlines recommendations for next steps.

The RePackage is the complete 2014 vision document which followed widespread consultation across the Diocese.  This was produced by the Vision Team that was formed by Bishop Logan, and co-chaired by the Rev. Anne Privett and Rob Crosby-Shearer.  It has four stated priorities and a detailed implementation plan to take the Vision forward and was approved as the Diocesan Vision by the Synod that year.

2015 RE: Implementing the Vision -The Journey So Far

This short-term plan set the direction for how we, as a diocese would enliven our vision as expressed in the Vision Fulfillment Journey document produced in 2015.

The DTT was constituted in order to make recommendations to Synod 2010 for an approach for transforming and regenerating the diocese in a post-Christian society. This is a foundational document in understand how we have come to our current diocesan vision.

The DMRIT was struck by Synod 2006 to implement the work of the DMRT (see above). This rerpot summarizes the team's findings and makes recommendations to Synod 2008 for implementation.

Considering letting your name stand as a synod delegate? Already said "yes" but aren't exactly sure what that means? This comprehensive guide outlines the responsibilities of being a synod delegate and member, and will provide you with the tools necessary to fulfill this important role in the life of our diocese. A short description the roles and responsibilities can be found here.

The Canons and Regulations of the Anglican Synod of the Diocese of British Columbia is the governing document of the synod and sets out the principles, rules and regulations that direct the corporation. This is an important document for members of synod to acquaint themselves with before, during and after a synod.

This newsletter was circulated to synod delegates following the synod as a resource for them to speak about the important work that took place at the synod.