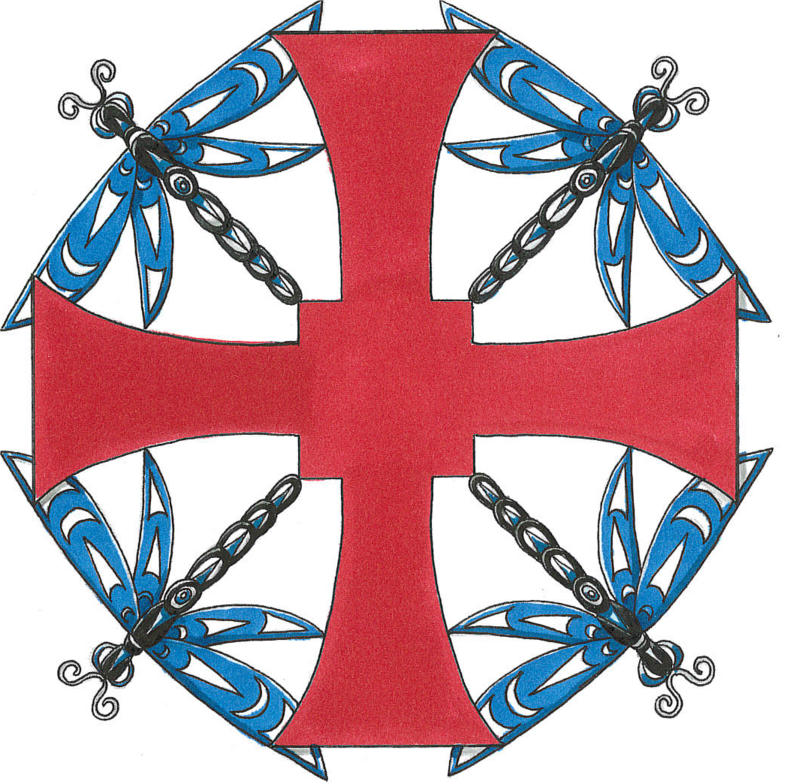 The insignia of the Order is based on the badge of the Diocese of British Columbia. The badge was granted by the chief herald of Canada in 2017 and is a combination of both original and new symbols of the diocese. The original part is the cross at its centre, which was part of the seal of the first bishop of the diocese, George Hills, and became part of the diocesan coat of arms granted in 1859. The new part is the dragonfly—a symbol that was adopted in 2015. As a diocese, we are seeking to be transformed as the body of Christ on these islands and inlets, shedding the colonial shackles of our past; those parts of our history when we did not live into God’s call to treat all peoples with dignity, respect and equality. For us, the dragonfly is a powerful symbol of our commitment to allowing the Holy Spirit to work in and through us, in partnership with all peoples of these lands, to transform us and to create in us a clean heart and renew in us a right spirit as the people of Christ. The dragonfly used in this insignia was designed for the chief herald by Doug LaFortune of the Tsawout First Nation on the Saanich penninsula. The position of the four dragonflies allused to the badge of the Anglican Church of Canada; a red cross with maple leaves positioned between the limbs.

This single word has been used to honour the faithful service over a considerable time by the members of the Order to their parish family, The diocese of British Columbia and the wider church and community. It also acknowledges that our service is rooted in faithful adherence to the teachings of Christ.