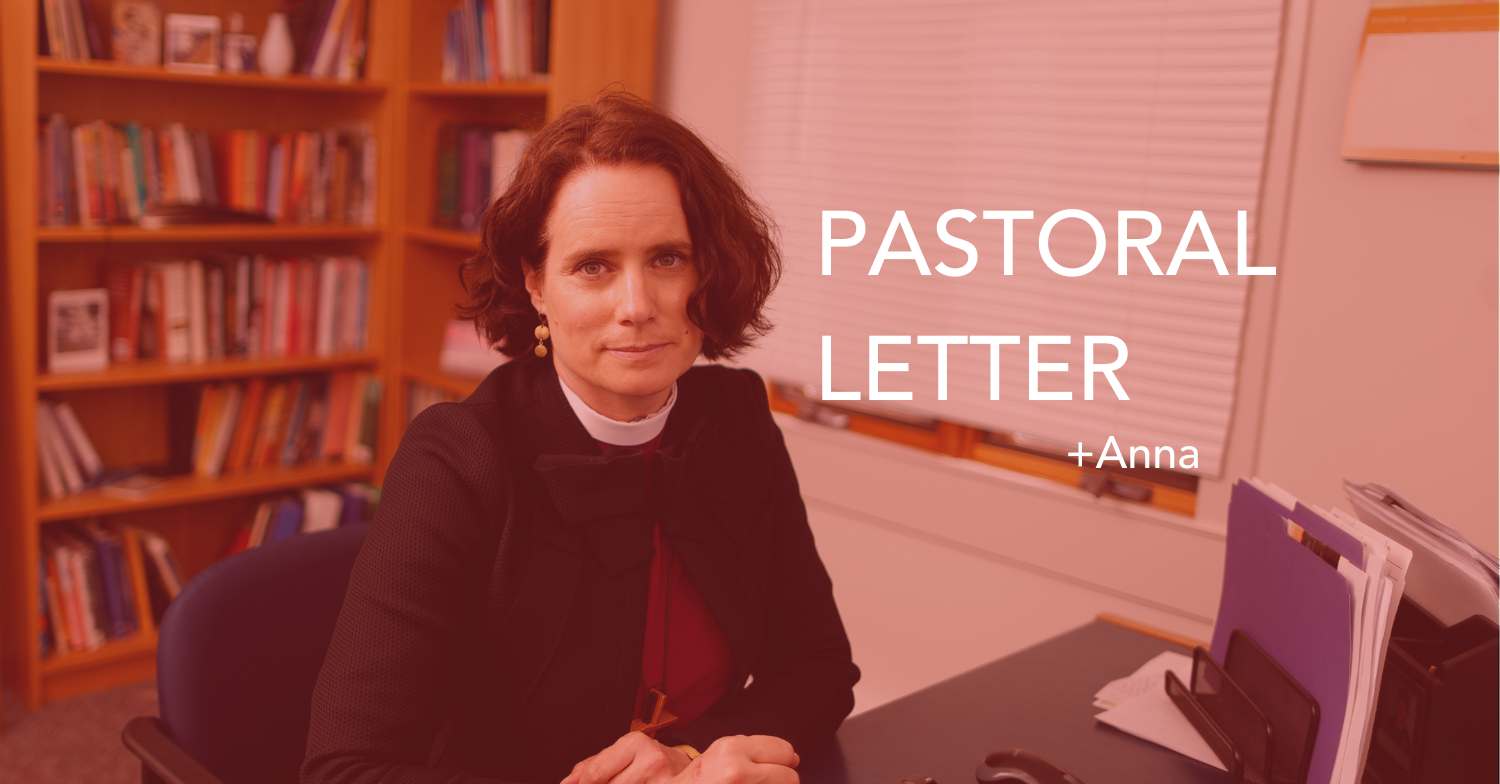 Anglicans of these islands and inlets;

With the discovery of more unmarked graves at the sites of former residential schools, and the knowledge that there are likely thousands more, we as a church and as a nation are being confronted with the truth about our history; a history built on colonialism and genocide perpetrated against the First Peoples of this land.

While there were a few residential schools on these islands and inlets, the one that was run by Anglicans was St. Michael’s on Cormorant Island which ran from 1894 to 1974. More information about this part of our history can be found on the diocesan website.

In 2015, Chief Bobby Joseph of Reconciliation Canada, himself a survivor of St. Michael’s, brought together leaders from the surrounding communities to participate in tearing down the building. There were approximately 600 survivors who gathered with their families.

Bishop Logan attended the event on behalf of the diocese. He carried with him a 10-ft x 30-ft banner bearing the words of the 1993 apology made by our then primate, Archbishop Michael Peers. This banner was attached to the outside of the school. Bishop Logan was asked to speak and as he did, he apologized for our part of in the system that failed to recognize the Creator in the land, the sea and the sky. He apologized for how we failed to see the Creator in the First Nations people, in their language, traditions, culture and spirituality.

Following his apology, +Logan was given an eagle feather, a symbol of honour understood to represent the connection between the Creator and the people. Logan carried that feather until his retirement in 2020 and he passed it on to me at my consecration. Earlier this month, I took the feather and travelled to ‘Namgis Nation. After the confirmation of the unmarked graves in Kamloops, Chief Don Svanvik and I had been in touch to talk about whether similar searches should be done at the site of St. Michael’s. Following that meeting, I wrote a letter to him and his counsel offering our support. While he is grateful for our offer, he is clear that before anything can be done, ‘Namgis Nation needs to consult with survivors and with surrounding nations. Children from as far as Haida Gwaii and other coastal communities attended St. Michael’s.

During the few days I was on ‘Namgis Nation, Chief Don arranged a Sunday afternoon session at which survivors of St. Michael’s and some of their family members could come and talk with me. Chief Don wondered if they would want to talk about finding unmarked graves on the school grounds. While this was a topic of discussion, it did not dominate the conversation.

I heard many stories that afternoon, but first and foremost what I heard from the survivors was a request for compassion and systemic change. They are tired of the racism they face and of the structural injustices they encounter in every aspect of their lives—from commerce to healthcare to child welfare. ‘We used to have a huge territory, we used to fish, now we are stuck on this little rock, and we can’t fish.’ ‘How come so many of our grandchildren are in foster care?’ ‘I am so tired of having to explain myself, to prove myself,’ two of the women told me.

As I pray and reflect on what I saw and heard on ‘Namgis Nation, I offer the following reflection.

Finding the unmarked graves is an important part of healing for these communities, but it is up to the First Nations to decide when and how that work gets done.

For our part, we must recognize and atone for the thousands of children who died at these institutions. That is our work to do. But it doesn’t end there.

The real work, for us as settlers, is in building a more just and compassionate society where Indigenous peoples are no longer confronted with interpersonal and systematic racism at every turn. The legacy of Indigenous subjugation and discrimination through policy and practice continues today. Addressing this is our work.

The road of reconciliation is long and there are no shortcuts. An important part of our work is coming to understand the colonial history of this place and overcoming the racism and white supremacy that are part of both our history and our present.

To that end, please join us this fall as we study together Challenging Racist BC and learn with us about the historical context in which we find ourselves on these islands and inlets. More information about this study will be available in the Fall. We intend to begin in November.
As Anglicans, we have a particular calling that requires us to repudiate the heretical colonial version of our faith that conflated the kingdom with nation building and mission with the spread of Anglo-Saxon sensibilities.

One of our baptismal covenants is to respect the dignity of every human being. Individually and collectively, we must recognize the ways in which we have failed to do this and then, with God’s help, we must strive to embody this sacred promise.

Members of the ‘Namgis Nation are doing incredible work connecting elders and young people to pass on culture and language, thereby reclaiming what has been taken from them. That is where the hope is found. It is our work to remove the barriers in its path so that hope can grow and flourish there.