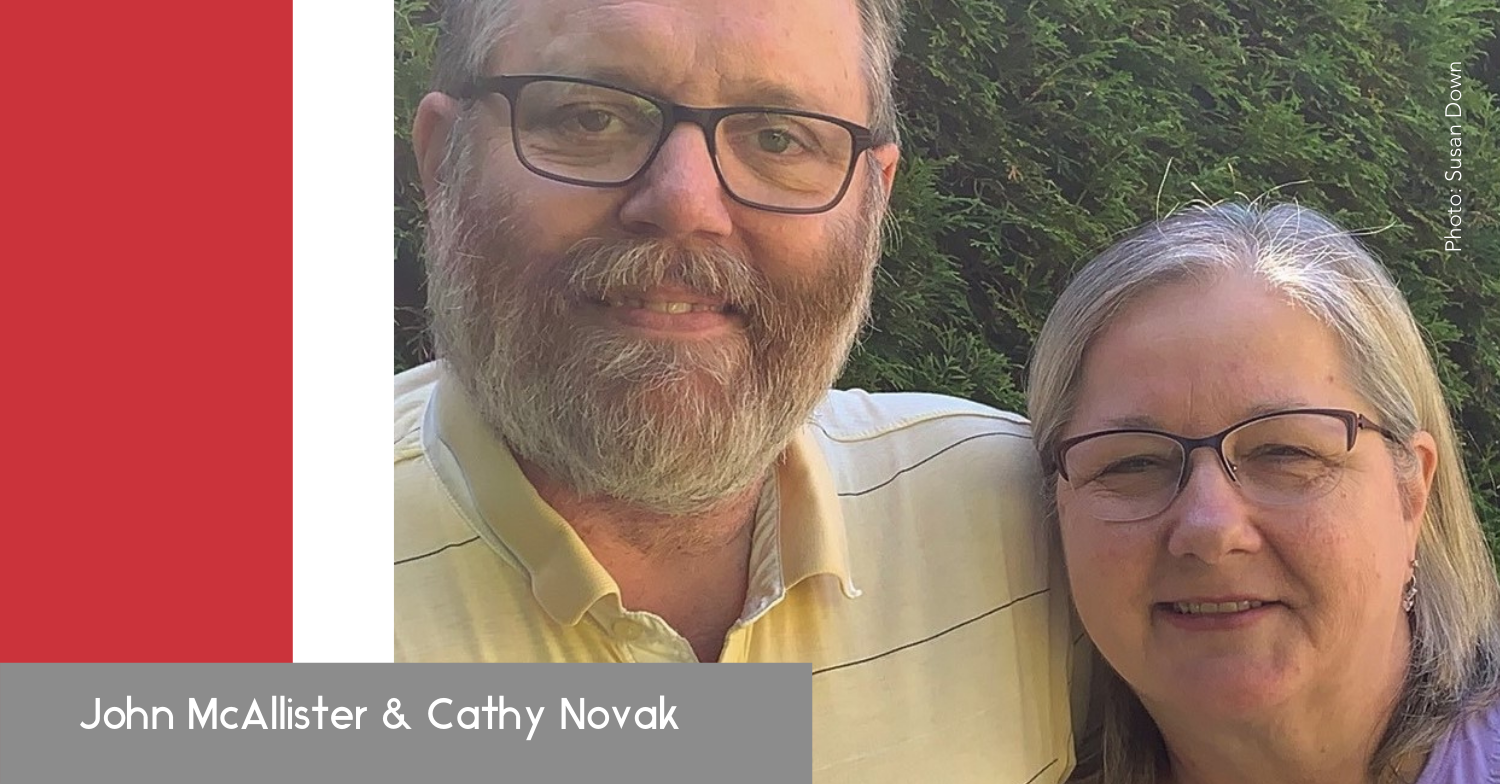 Saanich parishioner talks about her ordeal

Like many people, Cathy Novak is anxious about Covid-19. But unlike the others, she knows firsthand of its devastating toll on health. She remains on medical leave from her job as a dental hygienist, slowly recuperating after contracting the virus in the spring. Cathy has told her story to the news media several times, but she and her husband, John McAllister, agreed to meet me in their backyard (10 weeks after coming home) to talk about how faith sustained them.

Returning home to Victoria after attending the Pacific Dental Conference in Vancouver in early March, Cathy, a healthy 60-year-old, noticed mild flu-like symptoms. When she wasn’t improving, she made an appointment at the newly-opened testing centre, and less than 24 hours later, she got the verdict: COVID-19.

Meanwhile, in her household, they were careful not to spread the illness. That second week, she started taking her temperature several times a day, watching her fever rise and fall. She got daily phone calls from the health authority. Lon Towstego, the couple’s minister at the Parish of Central Saanich, phoned to pray with her. The couple had been married at the church only six years before. A second marriage for both of them, they met at a local square dance club.

By March 21, her symptoms had worsened so much, they called an ambulance. But just getting herself to the entrance to meet them was an ordeal. “Cathy was fighting to get on a pair of pants and shaking really badly. When she got to the front door she sat down and her breathing sounded like she’d run a marathon,” said John.

It would be a month before he saw her again.

At the Royal Jubilee Hospital in Victoria, Cathy was put on a ventilator the same day. She was put in an induced coma for two weeks in the special COVID-19 intensive care unit and remained in the hospital until April 20. At the time of her diagnosis (a week after the World Health Organization declared the pandemic) BC had identified only about 100 cases. As of September 21, that number has swelled to more than 8,000.

During the agonizing wait when Cathy was in a coma, John, who works in IT education support with Island Catholic Schools, says he was sustained by what he calls the three Fs – faith, friends and family. “I have always found that prayer is an amazing thing,” he said. He routinely went walking after dark, not wanting to bump into people he knew. Towstego continued to pray with him on the phone daily. “I had some pretty heavy-duty arguments with God,” he said. “My relationship with Cathy is the best thing that ever happened to me. All I get is six years?”  About halfway through, he felt God saying she wasn’t going to die, so he felt more hopeful.

For her part, Cathy says she feels her faith has been intensified. “I’ve always felt like I don’t walk alone.”  After helping three elderly relatives through their last years, she used to joke that she didn’t want to live to her 80s, claiming it was nothing but doctor’s appointments and aches and pains. “I’ve always been very grateful for things, but I came out of this horrible ordeal just feeling that much more grateful,” she said.

Looking through all the messages of love and support that came during her hospital stay, was like “going to my own funeral,” said Cathy. “We had people across Canada praying for me.”

The severe effects of the virus and the coma have made for a long recovery for Cathy. After waking from the coma she looked at the clocks and thought they were running backwards. Cathy speaks three languages, but finds she searches for words when she talks. She now does daily Sudoku and word puzzles to exercise her brain.  When she came home, she wasn’t able to open a pop can. Now her hand tremours have subsided and her strength is back.

The trauma caused much of her hair to fall out and she has a shorter shoulder length hairstyle, trimmed by John.  “The hair loss really brought me down for some time as It took me by surprise,” she said. “Now I try to appreciate that it reminds me of how much I went through & therefore should give myself a break when I don't accomplish my daily goals.”

Still she is getting used to a new normal. “I still have to conquer my anxiety about everything Covid,” said Cathy, adding that what she misses most is hugging her mother. “We go out for nightly walks and we've kept to ourselves a lot,” she said. “We are missing our favourite people and activities, but still feel safer in our little cocoon.